NativeJIT is a just-in-time compiler that handles expressions involving C data structures. It was originally developed in Bing, with the goal of being able to compile search query matching and search query ranking code in a query-dependent way. The goal was to create a compiler than can be used in systems with tens-of-thousands of queries per second without having compilation take a significant fraction of the query time.

Let’s look at a simple “Hello, World” and then look at what the API has to offer us.

We’re going to build a function that computes the area of a circle, given its radius. If we were to write such a function in C, it would look something like

For our example, we’re defining a function that takes a single float parameter for the radius and returns a float area, so our template parameters would be <float, float>.

The allocator provides the memory where expression nodes will reside. Any class that implements the IAllocator interface will do.

The constructor for allocator takes a single parameter which is the buffer size in bytes.

The FunctionBuffer provides the executable memory where the compiled code will reside. In order to allow code execution, this memory must have Executable Space Protection disabled.

NativeJIT provides the ExecutionBuffer class which is an IAllocator that allocates blocks of executable code. Classes starting with I are interfaces, so this is saying that ExecutionBuffer satisfies the IAllocator interface. Its constructor takes a single parameter which specifies its buffer size. Note that the buffer size will typically be rounded up to the operating system virtual memory page size since the NX bit is applied at the page level.

The tree is built from the bottom up.

On the next line, expression.Immediate(PI) is an immediate value leaf node whose value is equal to PI. Node b is defined to be the product of node a and PI. 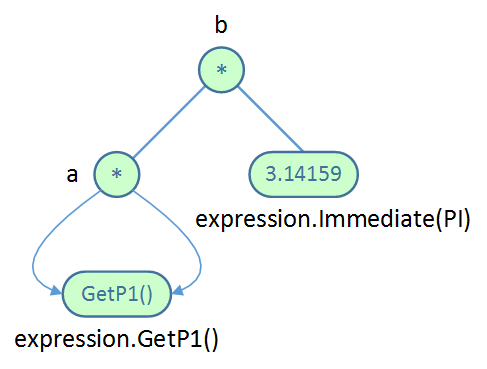 Note that each of the node factory methods on Function is templated by the types of its children. This is an important safeguard the prevents the construction of a tree with type errors (e.g. adding a double to a char).

Once the tree is built, it’s time to generate x64 machine code:

The compiler returns a pointer to the compiled function. In this example, its type is float (*)(float).

You call this just like calling a C function!

Putting it all together

If you’re interested in seeing the x64 code, fire up the debugger and set a breakpoint on a line after the code has been compiled, for example the line float p1 = 2.0.

Then get the value of function, and switch into disassembly view, starting at this address. Here’s what you should see on Windows.

Linux output may look slightly different because of differences in the ABI.

Rules of the Road

In the current implementation, each node will be evaluated exactly once. This guarantee is an important optimization that holds for common subexpressions. These are nodes that have multiple parents.

Common subexpressions often show up when traversing data structures. In the following example

the expression foo[i].bar is a fairly complicated subexpression involving multiplication, addition, and a pointer dereferencing. Since it is a common subexpression, this work will only be done once.

NativeJIT provides an experimental ConditionalNode analogous the the ternary conditional operator in C. Today the generated code evaluates both the true branch and the false branch, independent of the value of the conditional expression. Down the road we intend to rework the code generator to restrict execution to either the true or the false path. Today the register allocator makes assumptions about register spills and temporary allocations in both branches, and these assumptions must be carried forward through all code that is executed after the first conditional branch.

It’s important to take into account whether the code will run locally. For example, if you’re running JIT’d code locally, it is legal to use the address of a C symbol as a literal value. If you are JITing on run machine and executing code on another be aware that there’s guarantee that the symbol will be at the same address on another machine.

This scenario typically comes up when attempting to call out to external functions. The solution is to have the caller pass the address in as a parameter of the compiled code, instead of relying on a function address in an ImmediateNode.

As mentioned earlier, NativeJIT only implements x64 stack unwinding on Windows. Aside from the debugging impact mentioned above, the other risk in omitting stack unwinding is that an exception thrown from a C function called from NativeJIT code may not be caught properly on Linux and OSX.

If you grep for DESIGN NOTE in the code, you can find explanations of other quirks in NativeJIT.

These are simple types (e.g., char or int) or pointers to anything. This means that we can have, for example, pointers to structs but we can’t have struct literals.

Field de-reference; basically like ->. If you have a, and apply the b FieldPointer, that’s equivalent to a->b. There’s no . because we don’t have structs as value types.

Because we have some operations that can only be done on pointers (or only done on references), we have AsPointer and AsReference to convert between pointer and reference. This is free in terms of actual runtime cost:

Binary artihmetic ops take either two nodes, or a node and an immediate. Note that although the types are templated as L and R, L and R should generally be the same for binary ops that take two nodes – conversions must be made explicit. For Rol, Shl, and Shr, the immediate should be a uint8_t.

Unlike other nodes, which return a generic T, compare nodes return a flag. The flag can be passed to a conditional, which takes a flag.

These sounds really weird, but they were useful for some obscure reasons.

This is used for packed types (i.e., bitfields that get packed into 64-bits) to extract a bitfield.